the little art seeker saw for you the incredible exhibition around Vermeer and the masters of genre painting at the Louvre museum.After queuing for 2 hours we discovered with awe the gorgeous paintings of the master of light:Vermeer! 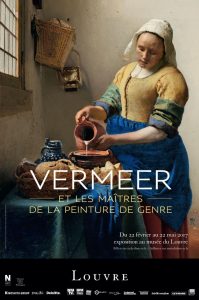 In the 17th century,Delft was a very rich city ,with an aristocratic sensiblity.It was one of the most important city of the Republic of the United provinces.Vermeer was active at a period where the genre painting was developing itself which was going to be his trademark.

The exhibition’s purpose is to make you understand that in a Republic which was young and wealthy ,great merchants,men of power loved this type of painting and that the great Dutch master was not alone but had probably relationships with other painters and that he knew Gerard Dou and Frans Van Mieris in Leyde ,Gabriel Metsu in Amsterdam or Jacob Ochtervelt in Rotterdam .The links between all these painters were indispensable to their creations.

Vermeer remains among all these creators ,the painter of synthesis and metamorphosis.When the genre scenes appears in the hands of his friends full of delicate details ,Vermeer manages to transcend it into a moralised genre where light and air circulate where silence and mystery surround his beautiful characters;

To illustrate ,the painter’s talent the exhibition starts by two paintings :the Gold Weigher by Pieter de Hooch ,1684 and woman holding a balance by Johannes Vermeer.1664. 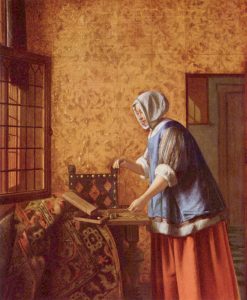 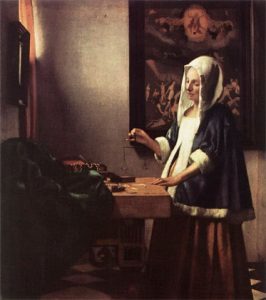 The woman represented by De Hooch stands in an opulent interior and seems full of grace and determined in her arrested gesture.De Hooch was a a painter active for several years in Delft who knew Vermeer and probably the quality of his work.In Vermeer ,the subject leads to contemplation .The female figure is portrayed against the background of the last judgement on the wall,a painting within the painting.The use of the light to make a moral point, a way of enveloping people and objects in mystery and profound thought is pure Vermeer!

Since they lived in the most thoroughly urbanised country of the 17th century , many Dutch citizens could read and write.This was not true of Louis XIV’s France ,which was essentially rural.

Rich Dutch people,loved to have genre painting in their houses because it was a way for them to show their social status and these little paintings were very expensive and sought after..The artists provided genre paintings focused on one specific type of reading and writing, namely the exchange of love letters.

The painter must represent silence,concentration and the passage of time.For Ter Boch and Metsu,the scenes are made to represent reality ,and wealthy interiors with servants in apron and walls lime-washed walls,whereas in Vermeer’s universe a crumpled letter ,thrown down on the floor transforms the work in a mysterious message that radiates from the simple object.The young women who gaze into mirrors seem to be offering variations on the theme of silence, gaze and meditation. 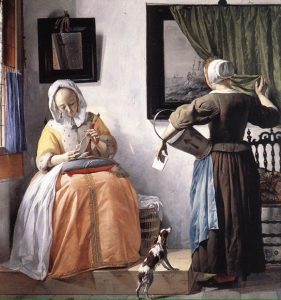 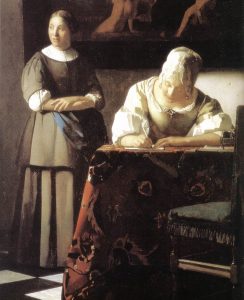 A beautiful parrot,links three virtuoso paintings.In Leiden ,Van Meiris was Dou’s pupil but he departs from his master.While Dou,seeks to recreate a story set in a precious niche,Van Miers raises the pastime of an elegant lady to the level of poetry.His figure looking at her African grey parrt is as fine as any princess from any of the courts of Europe.

Netscher in the Hague,paints a page in the dimly lit background in a play on Dou’s ideas.The cushion in the centre of Van Mieris version ,seems to foreshadow Vermeer’s creation. 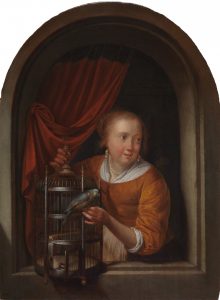 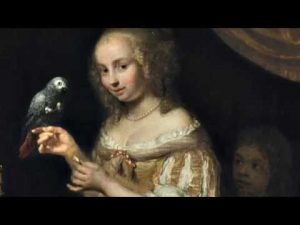 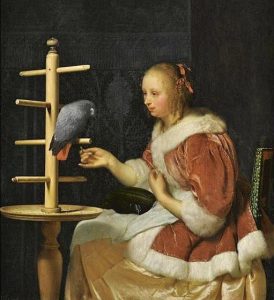 From one lacemaker to the other

The Louvre lacemaker is often prey to misreading interpretation.In fact the lacemaker depicts an upper class young woman engaged in an activity comparable to the practice of music,while it seems that the sturdy individual delineated against a whitewashed wall,absorbed in making bread pudding ,is meant us a nourishing figure ,a kind of allegory of plenitude and health,a secular virtue,a glow with the grace conferred by the light. 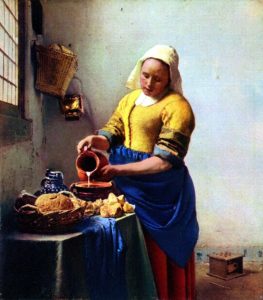 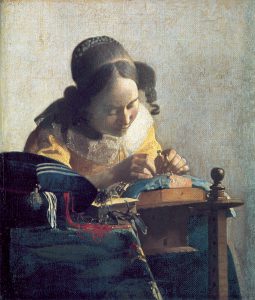 We are not surprised to see Vermeer’s astronomer and geographer are both shown in broad dailight.The originality of the choice becomes obvious only when we look at other pictures of scholars in their studies where they are working in the dark.The instruments:the astrolabe,the globe,as well as the kimono style dressing gown evoke the growing cosmopolitanism of the Dutch culture.The variations on a theme are typical of Vermeer but both can be read as marking a departure from tradition.In the end neither the Astronomer or the geographer are portraits:they are types of occupations of a social class.The exhibition makes an interesting parallel with Gerard Dou’s astronomer .The impression is that of a total virtuosity in the rendering of the light piercing the intense darkness.His subtile plays on light made him famous,but his outdated outfit gives to the whole an old fashioned note. 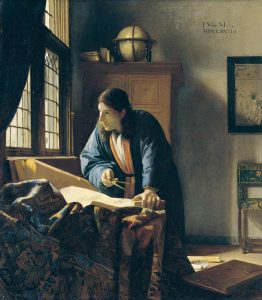 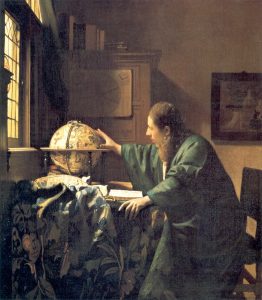 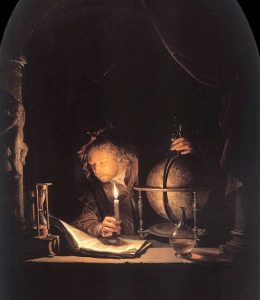 The exhibition ends with he huge painting realized by Vermeer at the age of 20.The master of Delft questions the very idea of genre painting.In the allegory of the catholic faith,he inserts an abstract figure embodying an idea into the setting of an opulent genre scene.

Instead of elegant women and musicinas we find the figure of virtue ,ruling the world,here symbolised by the globe.We regognize the victory of faith over heresy .The interior portrayed suggests the hidden churches of Holand in which catholics like Vermmeer were allowed to worship in private.The chalice,crucifix,crown of thorns evoke a liturgical ceremony.

The little art seeker loved this splendid exhibition dedicated to the dutch master of the genre painting and recommends it warmly if you come to visit our beautiful Paris!!! 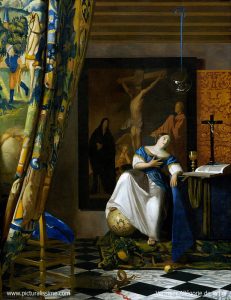